On Doug Fieger And The Knack 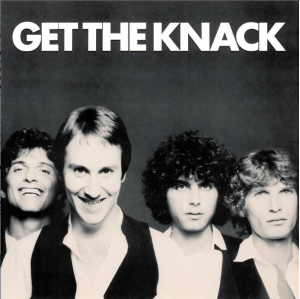 The front cover of their debut LP

Doug Fieger, like me, was a huge Beatles fan, and that came across in his music, which is probably a major part of why I found the Knack so appealing. He even crafted the band’s image to be a reflection of the Beatles, which ironically was part of The Knack’s undoing. A lot of musicians cite the Beatles as a huge influence on their work, but in the end, Fieger took it just a little too far. Because of this, even as the Knack dominated the charts in 1979, there was already a growing “Nuke the Knack” backlash movement, just waiting for them to fail.

The band’s records were even on 1960’s vintage Capitol labels. 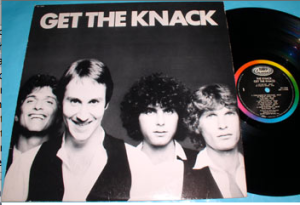 I was five when the Beatles last recorded together, so I had pretty much missed them. As a result, I had been expectantly waiting for “the next Beatles” of my generation to appear (and still naive enough to believe that there would eventually be a “next Beatles”). When The Knack exploded onto the charts in the summer of 1979, I was taken in, not just by the image, but also by their Beatles-esque sound. Don’t be mistaken, The Knack, with Doug Fieger writing and singing their songs, were very good.

That summer, “My Sharona” topped the charts and went on to be the #1 single of the year. “Good Girls Don’t” and “That’s What the Little Girls Do” also climbed the singles chart, and “Get The Knack” shot to the top spot in the album charts. I thought “the next Beatles” had actually arrived. I also liked that Fieger’s lyrics were naughty, which gave them a slightly rebellious feel, even in their black ties.

The Knack’s next album in 1980, “But the Little Girls Understand” was also good, but, I uneasily admitted to myself, not quite as good.

This album’s big single was “Mr. Handleman,” which like the LP, didn’t hit quite as big.

Here’s a couple more from their second LP:

Disappointed, I anxiously waited for their third album, which would sort of be the tie breaker on the “next Beatles” thing. In 1981, they released “Round Trip,” which was utterly forgettable, and for me, officially relegated them to the “what might have been” category. It also made me realize, maybe for the first time, just how difficult it is to be the Beatles, even for two albums.

With that, I moved on, and so did the music industry. The Knack was suddenly passé, a relic of that awkward time between disco and New Wave. The Knack wouldn’t release another album for ten years.

Years later, as a husband and father, I began purchasing CDs to replace my old records, and I made sure that “Get The Knack” was one on my early acquisitions. Listening to it again for the first time in years, I remembered how good that album was; nowadays, a couple of times a year it will occupy one of the six spots in my car CD changer. A few times I heard about Knack reunion tours that I planned on going to, but nothing ever seemed to come of it. In 2005, The Knack was scheduled to appear on the NBC reality show Hit Me, Baby, One More Time, which was supposed to be a chance for old bands to get a fresh chance on TV, but the show was so terrible it got canceled right after A Flock of Seagulls were on it.

A year later, Fieger was diagnosed with cancer, for all intents and purposes closing the books on The Knack. And now, with Fieger gone, the band is literally a part of the past.

As for me, I still have “Get the Knack,” which will console me, and date me somewhat, as I drive to UMBC in the morning. Man but that was a good album.

Posted in Music, Personal. Tags: 1979, But the Little Girls Understand, Capitol Records, Doug Fieger, Get the Knack, Good Girls Don't, Hit Me Baby One More Time, Mr. Handleman, My Sharona, Nuke the Knack, Power Pop, That's What the Little Girls Do, The Knack, the next Beatles. Leave a Comment »