At The UMBC Basketball Game (Thanks, UMBC Training Centers!)

A few weeks ago, I was fortunate enough to win a pair of basketball tickets from UMBC Training Centers. The seats for last night’s game against Penn were in a great location, at center court, just four rows behind Media Row. As a bonus, the women’s team was playing the early game, and my wife and I arrived in time to see the ladies rally from 5 down with 1:36 left, only to have Carlee Cassidy’s potential game-tying shot bounce off the rim as time expired.

Here are some of the images I captured at the game:

It was a pretty good crowd for a Wednesday during Winter Break.

Damon Massenburg works with me at the Help Desk, and he was at the game, too. 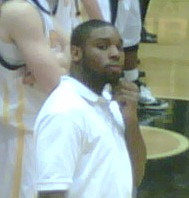 Damon not only works for the Help Desk, he also works for the basketball team. (And who says there's no work out there for students?)

Between games, my wife and I settled into our seats and soaked up the pregame atmosphere. Not everything, I’ll admit, made sense to us.

We watched as stunned coaches struggled to comprehend nervous players' strange behavior before the game.

The UMBC players entered the gym through a giant Moon Bounce.

Just before tipoff, the players gathered to share secrets, oddly enough, in the most public place they could find. It was like they were intentionally excluding us from their club and I felt hurt. And sad.

The radio broadcasters had this cool software that told them if they were pronouncing their French vocabulary correctly. 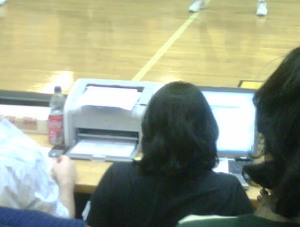 This printer on media row wiped out the paper equivalent of six cords of firewood while I was at the game.

This nice gentleman came by to collect the reams of printed paper and distribute them to random individuals scattered about the gym floor.

At one point, True Grit rushed the floor and tried to incite a rebellion, but no one seemed to notice.

During a timeout there was an attempted robbery; and then the mugger realized that all he was likely to get from a crowd of college students was about ten bucks and half a bottle of Five Hour Energy.

The Cheerleaders demonstrating their patented "Have another cheerleader stand on your hands" stunt. We, along with everyone else present, were very impressed.

"The Stunt" can be successfully deployed in various locations on the gym floor, as demonstrated here.

The radio broadcasters' attention remains riveted on the potential for tragedy inherent in "The Stunt."

The Dance Team, like a rival gang in a Broadway musical, are not impressed by "The Stunt." They take the floor from the Cheerleaders and begin distracting the crowd by remaining perfectly still.

The Cheerleaders, seething from the corner, plot their revenge against the Dance Team.

Finally, in a fit of pique, the Cheerleaders storm the floor, scattering the Dance Team. Once having retaken their ground, they stake their claim by performing "The Stunt."

Eventually, having conceded the night to the Cheerleaders and the near mythical power of “The Stunt,” the game resumes, and UMBC loses to Penn, 82-71.

And that’s what it’s like at a UMBC basketball game – at least the way I remember it.

The Help Desk gets phone calls occasionally from Mac users, and this is an area where I have little practical experience. So, last week, hoping to make myself a more well-rounded Help Desk Support Staffer, I acquired my first Mac.

My first assignment was to do a clean install of the new Snow Leopard operating system. I’ve done hundreds of operating system installs in my life from Windows 95 to Linux Fedora 12, so I figured that installing a Mac OS from a disk would be no big deal. I was wrong. The entire process, from the keyboard shortcut that enables the Mac to boot from disk, to the not-very-intuitive partitioning process, was so alien to me that I ended up having someone from Desktop Support just do it for me. Linux looked much easier to install, and that’s saying something.

Once the OS was installed, then I had to download a few updates and reboot a couple of times. The Mac’s reboot process was fast, so this ended up being no big deal. Next, I installed Microsoft Office for Mac 2008, which took almost as long as did the OS install. After that was done, I set up Apple Mail, which was easy, since the icon (a postage stamp with an Eagle on it) is on the Dock at the bottom of the screen, and the two or three settings are the same as in any other mail client. Finally, I was ready to use my Mac.

Almost all of the work I do is through systems that are accessed by a web browser, in this case Apple’s Safari, which reminded me a bit of the Google Chrome browser I had been happily using on my PC. Safari is fast and has the thumbnail collage view of recently visited pages and bookmarks that I’d come to rely on in Chrome.

I quickly discovered that Internet Explorer keyboard shortcuts mean nothing in Safari; in Safari, F5=Command+R, for example. Also, when a word is misspelled, I was used to using my right-click function to access the auto-correct; in Macville, this is done by Ctrl+left-click. This is where I made a neat discovery, which was that the Mac/Safari tricks worked on Chrome! One thing I don’t like about Safari (or Firefox for that matter), is that the address in the address bar doesn’t highlight with just one click. This means that if I want to enter a new address, I have to drag the cursor across the address; if the address if terribly long, this might require multiple attempts. (In Chrome, the address bar doubles as a Google search bar, too.)

I haven’t had to use Word for Mac much, but so far, I’m not impressed. At first glance, almost all of the radio buttons I’d come to depend on in the Windows version is gone. After a little exploration, it looks like the functionality is there, but it’s just inconvenient to access. Perhaps after I get used to it, I’ll find that it’s no different, but for right now, it’s awkward.

I really like Apple Mail. It’s easy to use, it highlights messages that are associated with each other (Re: ‘s) and when you send a message, it makes a cool “whoosh” sound. When a message arrives, there’s an audible alert and a number (representing unread messages) appears over the postage stamp icon. 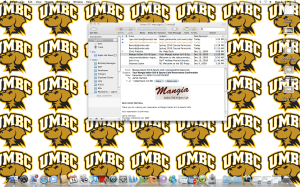 Another big plus with the iMac is the coolness factor. When you hide a window, the window seems to be vacuumed into the dock, where a tiny image of the window remains visible. Also the screen is bigger and brighter than my PC’s, with a built-in webcam that takes still photographs with a pre-installed program. The dashboard (represented by the black circle icon second from the left of the dock) is a neat feature, especially if you find yourself using the calculator a lot.

Clicking the dock icon makes the dashboard appear; clicking anywhere outside of one of the four apps makes it vanish.

The mouse is a bit strange. It feels small, and not having a right-click button takes some getting used to. The keyboard I am not in love with. It’s like an abbreviated version of a normal keyboard, and most notably lacks the numeric keypad that I’ve grown dependent on. 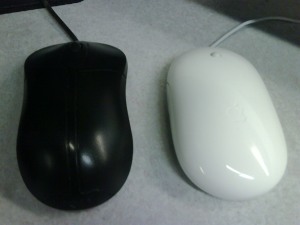 One thing that is very nice about the Mac is that there’s no tower for me to knock my knees against. Everything is self-contained behind the monitor, including the CD drive, and the only cords leaving my desk area are the power cord and the ethernet cable, which means there is very little wasted space. 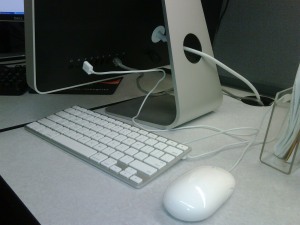 So far, I really like the iMac, although some things have to be relearned and will take some getting used to. Of course, I wonder if I like it so much that I’d be willing to spend an extra $700 on it in the real world. Probably not, but that’s one of the perks of working in IT, right?

I’m also wondering whether, as a Mac user, I’m required to grow a “cool-guy” half beard, like Justin Long. 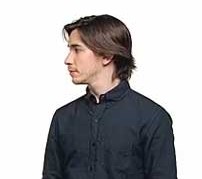 Today, the Help Desk was the scene of an all-day potluck dinner. Lots of folks brought in food, desserts and beverages. Here’s the menu (I think this is everything):

Here are some photos: 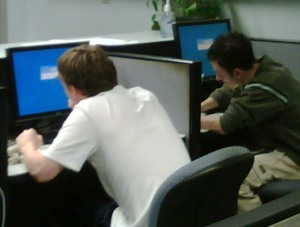 If we had been at Charlie Brown’s house, this would’ve been the fare:

Addendum: It’s only 2PM, and I’ve already consumed more calories than I would in an average day (the Belgian Chocolate cake finally got me). Not good! (And there’s still tomorrow…)