Yesterday was Winter Commencement at UMBC; in a bit, I’ll give you a window into my experiences there. But first, I want to back up a little bit, because I need to make mention of one of the neat perks of graduating: people are very happy for you, and glad to show it. For the past few months, I’ve had the pleasure of hearing congratulations from many family and friends, and getting nice surprises, such as what was waiting for me Tuesday inside my office:

Here’s a close up of the greeting card and treats that Anna and Barb lavished me with:

I also want to thank my good friends and co-workers at the Department of Information Technology who so readily took up my cause when I was in search of an extra ticket for my mother-in-law. Sandy Campbell at Institutional Advancement told me that I must have a lot of friends at IT, because she received many calls on my behalf. In the end, everyone was able to see me graduate in person, and I feel fortunate and grateful to be able to work with such good friends.

With the extra seat having been secured, all that was left to do was graduate.

On Wednesday, the first thing I noticed when I got to UMBC were the many very visible traffic control stations.

The second thing I noticed was lots of signage – everywhere.

If you couldn't land tickets to get inside the RAC, you could watch Commencement on television in a Lecture Hall. I've been assured that this is a great experience, but I can't help but feel that it must be a bit surreal.

If you get your picture taken with True Grit early, there are no crowds to fight.

Graduates were directed to the basement of Sondheim Hall, a foreboding place to which I had never before been.

Once I got down there, I noticed that each major was posted on the wall of the hallway, and we were directed to gather in front of ours.

Slowly, the hallway began to fill up, and we were directed to arrange ourselves alphabetically within our major, as this is the way we would enter the RAC.

Helpful UMBC staffers walked up and down the hallways, shouting instructions.

Those students with names that might cause a reader to stumble had their names written phonetically on their yellow cards. We were told to hold onto our yellow cards as if our lives depended on it, and then give it to someone on stage just before we walked.

At about 9:45, we began moving, and I expected that we would have to go outside. Not so! I had no idea that there was a tunnel connecting the basement of Sondheim Hall with the RAC, but there it was. I felt like I had been granted some secret knowledge because of my status as a graduate.

We processed in to the “Prince of Denmark March,” by Jeremiah Clarke. I was expecting “Pomp and Circumstance,” of course. When we got to our seats, we found this program waiting for us:

The first thing all of us did upon entering the RAC was to scan the crowd wildly trying to figure out where our family and friends were seated. For the longest time, I couldn’t find mine, and then I saw why – they had somehow secured seats in the first row on the floor, in a place where I would literally walk right next to them as I went to the stage. From my angle, they had been screened by the graduates in front of me, but I was happy to see that they had gotten such good seats.

A large black curtain had been raised at the end of the basketball court as a backdrop to the stage; it was wide enough to fill in the area between the basketball championship banners and as tall. In front of it was the UMBC lettered logo. On the stage itself were banners representing each of the university’s colleges, and there were chairs from one side to the other to accommodate the many dignitaries. In the center of the stage was the main podium, with two smaller flanking podiums on either side. On the second floor, at the railing next to the track, an announcer acted as Master of Ceremonies during the processional.

After we were at our places, the faculty and administration processed in. The regalia worn by many of them seemed straight out of Tudor England, or at least Harry Potter.  UMBC President Freeman Hrabowski was his usual chatty, upbeat self as he entered the arena. Almost as soon as we had been seated we had to rise and remove our very carefully placed caps for the National Anthem, performed by Casey Hively, the sole graduate on hand from the Music Department. After this, there were various greetings from dignitaries, and then a fairly short address by President Hrabowski, which mainly focused on the diverse stories of those graduating. I continued to clutch my yellow card tightly, remembering the admonishments of the staff back in the basement of Sondheim Hall.

Soon the graduates were being called to the stage, by individual colleges (i.e. College of Arts, Humanities and Social Sciences) and then by majors within those colleges. Staffers acting as ushers told each row when to rise and go forward, and wouldn’t you know it? Some unlucky Jonah two rows in front of me lost his precious yellow card! Staffers frantically tore through programs looking for the card, but to no avail. Regardless, he went to the stage, had his name called and got his handshakes like everyone else. Yes, that’s right, there’s no diploma given on stage, or even rolled up piece of paper – just a handshake from Dr. Hrabowski (which is still pretty cool).

This is me almost to the stage. Note the magical yellow card in my right hand. 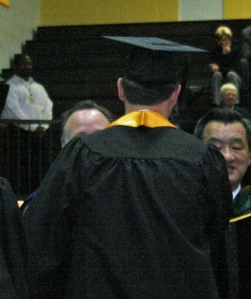 After handing in the yellow card and getting your hand shaken repeatedly, you’re done and it’s back to your seat. As we returned, we were given these lovely parting gifts form the Alumni Association: 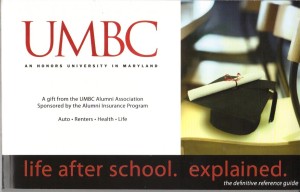 How to live in the Grown-Up World manual. Over 180 pages of helpful tips for young graduates. Most of these principles I have already violated countless times. 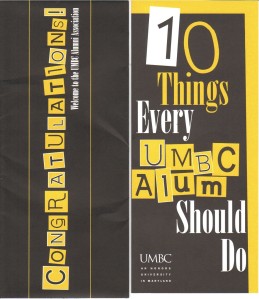 Inside the envelope on the left was the brochure on the right.

The inside of the brochure.

After getting back to our seats, all that was left to do was to listen to the other graduates’ names being called, taking note of the occasionally wild outbursts from some particularly exuberant families. One group in the bleachers was waving an Angolan flag.

After everyone had been called, Dr. Hrabowski spoke for just a few more minutes, admonishing us to savor these moments, as it “doesn’t get any better than this.” After this, we stood and sang the Alma Mater and then the administration, faculty and finally we, processed out, in our case back through the tunnel to Sondheim. 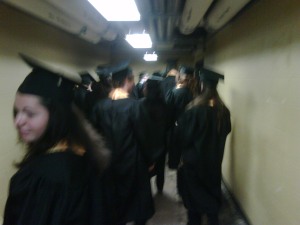 Moving back through the tunnel. 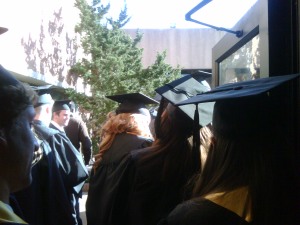 Breaking out of Sondheim Hall into the cold air and bright sunshine. 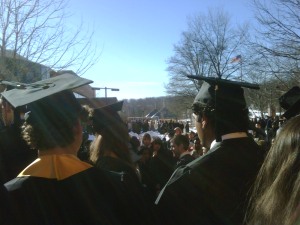 Once outside, the challenge became finding one's family amidst the crush of people.

True Grit was a convenient place to tell your people to meet you.

After my family finally fought their way through to me, I posed for my UMBC portrait:

After getting my picture taken, we gathered for a celebratory lunch. By the time I got home, I already had an email from the professional photographer, offering to sell me a package of photos for $80 or perhaps $150; I could also purchase a DVD for $45. I expect to soon receive my first fundraising letter; that’s when I’ll know for sure that I’ve graduated.