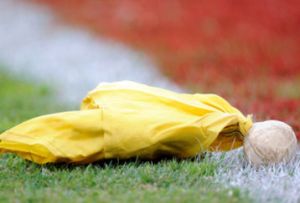 This morning there’s a lot of talk about how undisciplined the Ravens are, and how John Harbaugh’s coaching should be scrutinized for having allowed this state of affairs to go uncorrected. To all of this, I say:

The Ravens’ love affair with aggression goes all the way back to 2000 – our beloved Super Bowl season. The team was encouraged to be nasty, to be angry, to be mouthy. The Ravens were the team that would kick down your door and shout “Where is the son of a bitch?” The organization wanted its players to be intimidators; the result was spectacular and we loved it. But, there was a price to be paid, because the NFL was paying attention, too. Soon, it became clear that the crews officiating the Ravens games were looking at the team a little more closely than its opponents. No matter, as long as the Ravens were winning games, the penalties could be tolerated.

This mindset has been passed on genetically ever since, and the result has been a team that we have grown to love for its intensity and its passion; we have also learned to expect them to take penalties that seem unnecessary and at times, ridiculous. And yes, every now and then, they have a collective meltdown (21 penalties against Detroit in October, 2005, 13 penalties for 100 yards against New England in December 2007). Still, winning solves everything.

(The Oakland Raiders were the most penalized team of the 1970s, and no one criticized them for being undisciplined. Instead they were hated and feared. Being a consistently winning organization will do that for you.)

Harbaugh accepted this position knowing the culture – a culture that has been cultivated for a decade; to expect him to eradicate that in a year or two is unreasonable and more to the point, not a good idea. Most of these same “undisciplined” players took this team to the AFC Championship game last year, and no one called them to task for over-aggression. (Remember? The big complaint last year was that the offense was one dimensional.) What’s different this year? New faces in prominent places are committing the penalties now; not because they’re undisciplined, but because they’re not as good as the individuals they’ve replaced.

One big problem with the whole “coaching discipline” idea is that you don’t want players on the field thinking – you want them reacting. When Terrell Suggs got flagged for a block in the back on Domonique Foxworth’s interception yesterday, he was doing what he should have been doing – trying to block downfield for his teammate. The problem isn’t that Sugg is undisciplined, it’s that he isn’t a very good blocker. How much time do you want Suggs spending in practice learning how to avoid blocking-in-the-back penalties?

Yes, the Ravens are a heavily penalized team, but they’re in good company. In fact, 5 of the top 6 most-penalized teams in 2009 would make the playoffs if the season ended today. On the other hand, the Browns have committed over 30 fewer penalties than the Ravens. Do you still want the Ravens to make “discipline” a focal point of its team philosophy?