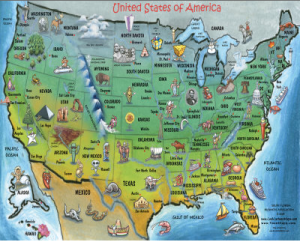 For today’s Friday History List, I look at state mottos, which as it turns out, can be fairly inscrutable at times. I started out intending to do a “Best State Mottos” list, but it soon became clear that weird mottos were far more common than good ones. Here are ten for you to wrap your mind around, plus a bonus territorial motto:

10. South Carolina – Dum spiro spero, While I breathe, I hope. Adopted way back in 1777, this motto seems like the plea of a desperate individual, someone who knows that things are always gong to be terrible, but still clings to vain hope. “Honey, pack the wagon, we’re moving to the land of futile optimism!” Plus, it’s just fun to say in Latin.

9. Maryland – Fatti maschii, parole femine, Manly Deeds, Womanly Words. The nation’s only Italian motto was added in the obviously sexist year of 1874. Having lived here all my life, I’ve never been sure if this was a criticism of diplomacy or an endorsement of balance. A few years back, feminist groups petitioned to have the phrase retranslated to be less offensive. Perhaps something more reflective of domestic reality should be considered, such as “Manly Deeds directly follow repeated Womanly Words.”

8. Montana – Oro y plata, Gold and Silver. The only state motto in Spanish, this motto apparently reflects what the founding fathers of Montana hoped would be eventually associated with their state. Now that enough time has passed to measure it against reality, they should change it to “Big and Empty.”

7. New Hampshire – Live Free or Die. You would think that this motto was adopted during the American Revolution, but it actually wasn’t officially added until 1945, just as the Cold War was starting. I guess the fear of Commies taking over New Hampshire must have been pretty intense back then.

6. Idaho – Esto perpetua, Let It Be Perpetual. This meditative thought became the state’s motto in 1890. Let what be perpetual? Potatoes? We’re never told. From this point on in my list, the state mottos start to get pretty incomprehensible.

5. Washington – Al-ki, By and By. Washington’s state motto is a old Chinook saying; I’m guessing this must have been the least offensive option out of some really terrible choices like, “My God, will this rain ever stop?”

4. Kansas – Ad astra per aspera, To the stars through difficulties. Born with Kansas’ addition to the Union in 1861, this motto perhaps reflects on the state persevering through its recent bloody past to achieve statehood. On the other hand, it could look forward to the U.S. space program a century later.

3. New Mexico – Crescit eundo, It Grows As It Goes. Picked in 1887, long before New Mexico was a state, this may be our most ironic state motto since next to nothing grows in the deserts of New Mexico, one of the “dustbowl” states of the Great Depression. They probably should change it to “It Doesn’t Grow And Then We Go.”

2. Oregon – Alis volat propriis, She flies with her own wings. Way back in 1854, Oregon was so busy setting up their new state government that they allowed a eight-year old girl to write their state motto…at least, that’s what I’m guessing.

1. Connecticut – Qui transtulit sustinet, He who transplanted sustains. Our oldest state motto, created in 1662, has survived over three centuries despite being perfectly ambiguous, just like Connecticut itself, which, as one drives along I-95, could be mistaken for a large county in New York, or maybe Massachusetts.

Bonus Territory: Puerto Rico – Joannes Est Nomem Ejus, John Is His Name. Adopted way back in 1511, it barely edged out the runner-up, “Bingo Is His Name-O.”

For today’s Friday History List, I look at what I consider to be the best-looking state flags. While this list is not altogether historic, but there are historic elements here.

10. Oregon – This flag makes the list for two reasons: It is the only state flag with different images on each side, and one of those images is a beaver. 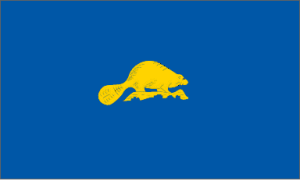 9. California – This flag has a bear on it, commemorating the Bear Flag Revolt of 1846, which “liberated” California from the oppressive, distant, remote hand of Mexico.

8. New Mexico – There are two states with cool Indian designs. I prefer New Mexico because it just looks cleaner and classier than Oklahoma. Also, the state’s name isn’t on the flag, which is always a plus.

6. Alaska – What’s better than blue and white? Blue and gold! (Think Buffalo Sabres.) Add to that the very cool element of the Big Dipper, and I’m on board. (“Hey, Sarah! I can see your flag from my Mac!”)

5. Hawaii – This flag reminds me of the Grand Union flag from the American Revolution, which makes me biased, but it’s my list, so who cares? There are two American state flags that include the flag of an enemy nation. This is one; Mississippi is the other.

4. Arizona – Arizona’s flag reminds me of a psychedelic painting that might have hung in a college dorm room in 1967, or perhaps a scene from the director’s cut of Yellow Submarine. For such a conservative state, this flag is pretty far-out.

3. Wyoming – A classic color scheme (red, white and blue), the state seal, and yes, a massive bison. What more need I say? 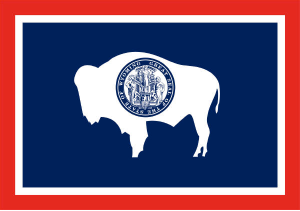 2. Ohio – Ohio has the only state flag with an irregular shape. In fact, it’s shaped like a cavalry guidon from the 19th century, which is probably why I like it so much. There’s a big “O” in the center, the colors are good and the stars reflect the number of states in the Union when Ohio was admitted in 1803. Lots going on here.

1. Maryland – The only state flag with English heraldry, the Maryland flag is comprised of the heralds of the families of the founder of Maryland, George Calvert, and thus this flag’s design can be traced back to the 16th century. The black and gold coat of arms is from the Calvert family, and the red and white is from the Crossland family (Calvert’s mother’s family). Interesting, the red and white of the Crossland herald became associated with Maryland secessionists during the Civil War and was banned for the duration. Put it all together and you have what is clearly the coolest flag of all the state flags.

One final note: It is very disappointing to note the number of states who apparently all said the same thing: “Design? Just throw the state seal on a blue field and maybe put the name on the bottom. Who cares what the state flag looks like anyway?” 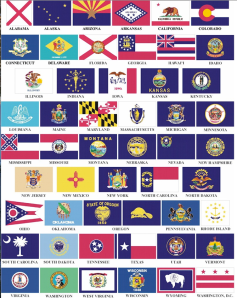 I understand that sometimes it gets a little rough between the sidelines, but what this ONE PLAYER did in this game in so over the top that I have to wonder if there isn’t sometime else going on:

Was she off her meds?

Is she the team’s “goon” who was sent out to do the coach’s dirty work?

How did she only manage to get a yellow card?

Is this the way she always plays? Why haven’t we heard of her before?

And now the important question –

How long until we can make her ambassador to North Korea?

Update: 4:09PM – From the University of New Mexico’s website:

‘University of New Mexico head women’s soccer coach Kit Vela announced today that junior defender Elizabeth Lambert has been suspended indefinitely for her actions in Thursday’s match against BYU in the semifinals of the Mountain West Conference Championship in Provo, Utah.

Effective immediately, Lambert is prohibited from participating in all team practices, competition and conditioning activities.

“I am deeply and wholeheartedly regretful for my actions,” said Lambert. “My actions were uncalled for. I let my emotions get the best of me in a heated situation. I take full responsibility for my actions and accept any punishment felt necessary from the coaching staff and UNM administration. This is in no way indicative of my character or the soccer player that I am. I am sorry to my coaches and teammates for any and all damages I have brought upon them. I am especially sorry to BYU and the BYU women’s soccer players that were personally affected by my actions. I have the utmost respect for the BYU women’s soccer program and its players.”

“Liz is a quality student-athlete, but in this instance her actions clearly crossed the line of fair play and good sportsmanship,” said Vela.

“Liz’s conduct on the field against BYU was completely inappropriate,” said UNM Vice President for Athletics Paul Krebs. “There is no way to defend her actions.” ‘

And the response from the MWC:

‘In consultation with the University of New Mexico, the Mountain West Conference endorses the disciplinary actions being taken by the institution to address the unacceptable conduct of the UNM student-athlete involved — which violated the MWC Sportsmanship Policy.

The MWC commends the University of New Mexico for its prompt response. The decisive manner in which it was handled is consistent with the MWC Sportsmanship Policy and the principles under which the Conference conducts intercollegiate athletics.

The MWC will continue its internal review of the overall dynamic involved in the match. The Conference will have no further comment regarding this case. The provisions of the MWC Sportsmanship Policy can be found in Rule 4 of the MWC Handbook – which can be accessed via the http://www.TheMWC.com Web site. ‘