Each of us can probably remember having to deal with a particularly difficult teacher in high school. Perhaps we didn’t like the subject (for me this would be math or science), or maybe we found the workload excessive. Sometimes there were just personality conflicts with individuals whom we found to be harsh or overbearing.

If provoked, we might, in a fit of pique, get worked up enough to say the wrong thing to our nemesis, which, if we weren’t careful, might land us in detention, or cause the teacher to have us killed. What’s that? You can’t recall any instances of teachers in your high school putting out a contract on students that angered them? Well then, you were just in the wrong high school.

At Mundy’s Mill High School in Clayton County, Georgia this fall, it seems as if 10th-grade teacher Randolph Forde had a problem student on his hands. On September 29th, he called the 16-year old out of class, demanding to know if he was gay. The next day, Forde argued with the student, and threatened “to hit him in his ‘effin mouth.” (Come on now, doesn’t that bring back memories of ol’ Mrs. Lardbottom from your school?) The student reported Forde to his school’s administration, but nothing was done. On October 9, Forde approached another student and offered to pay him for killing his classmate. Given the choice between earning some after-school money or destroying a teacher’s life, the assassin opted for the latter, and ratted out Forde. (Note to conspirators: It’s a bad idea to let the outcome of your plot to kill someone rest with the a teenage boy. Trust me on this.)

Incensed, the boy’s mother removed her son from the school and then filed a police report on October 12, resulting in Forde’s subsequent arrest and release on $10,000 bond. This, in turn, forced the school to remove Mr. Forde from the classroom (I guess being arraigned for conspiracy to commit murder is the triggering mechanism for intervention in Georgia public schools). Forde’s attorney now says it was all a joke. Funny guy, that Mr. Forde. Funny guy.

Sarah Palin, who, I’m led to believe, wants to be the leader of the free world, is using her endless, unmerited press coverage to attack Newsweek for their choice of cover photo. Palin said, “The choice of photo for the cover of this week’s Newsweek is unfortunate. When it comes to Sarah Palin, this ‘news’ magazine has relished focusing on the irrelevant rather than the relevant,” Palin wrote. “The out-of-context Newsweek approach is sexist, and oh-so-expected by now.”

"The Next President of the United States..."

Apparently, Palin posed in a skimpy running outfit for Runner’s World magazine, from where it was lifted by Newsweek. While it’s true that Newsweek was looking to make a statement by their choice of this photo, I’ve grown way past tired of hearing Sarah Palin disingenuously complain about being dealt with less than seriously by the media.  A year ago Palin could be granted an ignorance pass, but no more. If she wants to be taken seriously, she should appear on Meet the Press and Face the Nation, not Oprah. And when discussing economic policy differences with the President, she should stay away from silly-sounding comments such as:  Obama has a  “…backassward ways of trying to fix the economy.” Before you can sit at the grownup table, Sarah, you’ve got to be able to act like a grownup.

I know that just about every Ravens fan was relieved yesterday to learn that Steve “Wide Left” Hauschka had been released, but I feel terrible for him. As angry as I was when I saw his kicks sail outside the uprights, watching him walk back to the bench alone and then sit there staring at the ground, knowing that his dream was falling apart in front of his eyes… well, for me that was just heartbreaking. I suppose Hauschka knew that he was finished in Cleveland Monday night; I just can’t imagine having to continue playing, showering and dressing (without having the heart to celebrate a win) in the locker room, and then the long trip home – all the while knowing that you’re about to be fired. And then, to add insult to injury, the team’s fans dance on your grave. Good luck to you, Steve Hauschka. 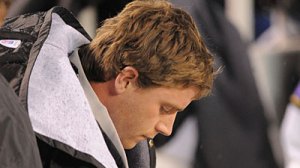