As a kid growing up in Baltimore, I fell in love with the Minnesota Vikings. How did such a strange thing happen? Accidentally, of course.

I first became an NFL fan in 1973 (that was also the year I started playing pee wee football). At that time, my hometown team, the Baltimore Colts, were between two eras: Johnny Unitas & Bert Jones. They were a terrible team, finishing 4-10 in 1973, and then 2-12 in 1974. So, while they were still my number one team, they were difficult to watch.

One NFL Sunday around this time, the living room console television in my parents’ house was tuned to the NFC game, and what I saw were players dressed in awesome purple uniforms, with horns on their helmets. The dirt field was a mess, it was snowing and they didn’t seem to even notice. Their coach stared impassively out at the field while these purple machines consumed their opponents and spit out the remains on the snow-covered ground. On the sidelines, standing next to players who refused to cover up against the cold, was a guy dressed as a Viking, with a shield and a sword and he was screaming in a sort of blind rage. This, I thought, is how professional football ought to look. And at that moment, I fell in love.

The Vikings defense at that time was called “The Purple People Eaters,” and that they did. As I followed their exploits through the playoffs, I watched as they mugged and beat down one team after another on their march to the Super Bowl.

Their offense was really good, too. Quarterback Fran Tarkenton was famous for scrambling in the pocket, buying time until a receiver came open. It seemed like one always did. 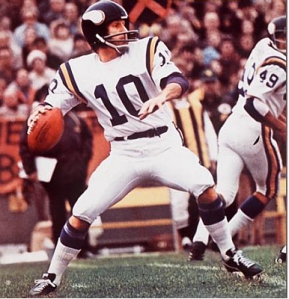 In the 1970s, the Vikings finished 1st in their division almost every year, and went to three Super Bowls, losing to each of the era’s AFC powerhouses (Dolphins, Steelers, Raiders) once. No matter, I was hooked on the purple, and as any adult will tell you, childhood addictions tend to stay with you forever.

When the Colts abandoned Baltimore in 1984, I was lucky to have the Vikings as an easy fallback team. They continued to have success, reaching the playoffs seven times between 1987-1996, but they never made it back to the Super Bowl. Still, I was a fan, and was even crazy enough to wear Vikings gear to the Vet in November of 1989 for a game against the Eagles (Herschel Walker returned the opening kickoff for a touchdown, but they still managed to lose 10-9).

When the Ravens came to town, I immediately elevated them to my number one team, but my passion for the Vikings remained. (I was thrilled when the team ditched the “Browns” with their hideous color scheme and adopted purple.) I have since seen the Vikings and Ravens play twice in Baltimore, which is always a treat. I still wear Vikings gear, but now it’s on a platoon basis with my Ravens stuff. Every Christmas, one of my football traditions is intertwined purple & gold garland, which remains on display until both the Ravens and Vikings are eliminated. Which brings me to today.

Sadly, midnight came for the Ravens Saturday night, but on the bright side, the Vikings looked great in smashing the super-hyped Cowboys yesterday. So, for now, the purple garland remains, and I get to look forward to the 8th appearance for the Vikings in an NFC Championship game.

In all of this is a lesson: it’s always good to have a fallback option.

One Response to “There’s Still The Vikings”